Some research is best done behind heavy, locked doors.

When geologist Jeffrey Post recently embarked on an experiment involving the Hope Diamond, at 45.52 carats, the world’s largest deep-blue diamond and one of the most famous and valuable museum objects on earth, he and his colleagues locked themselves and the diamond inside a large vault in the depths of the Smithsonian’s National Museum of Natural History. 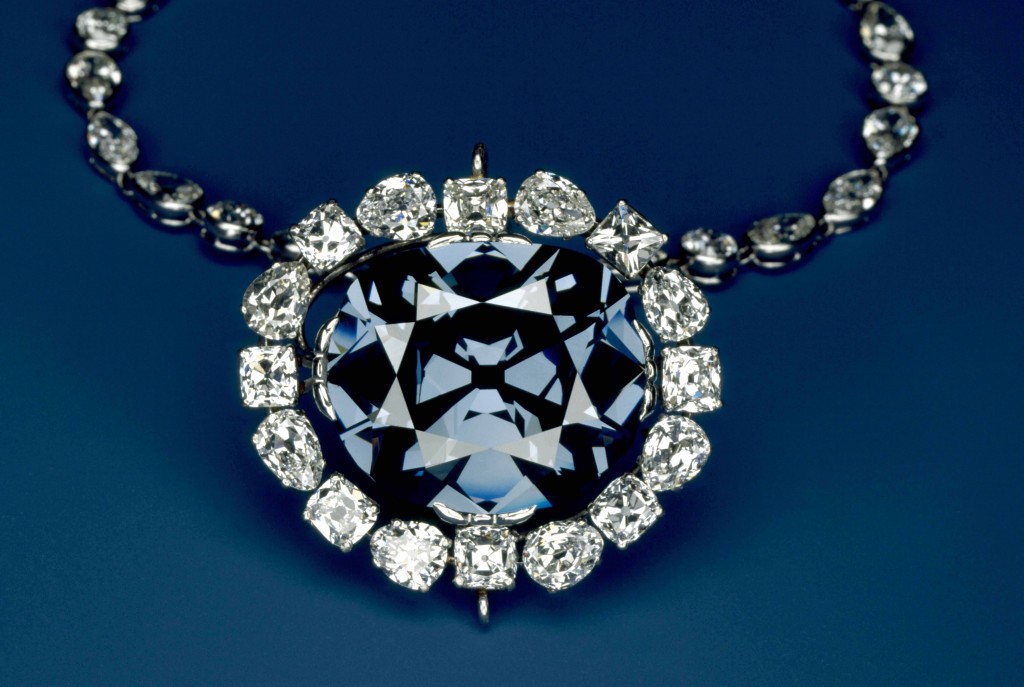 The 45.52 carat, deep-blue Hope Diamond is shown here inside its surrounding pendant of 16 pear- and cushion-cut white diamonds. (Photo by Chip Clark)

Post was investigating a phenomenon that the millions of museum visitors who gaze at the diamond on its rotating pedestal behind bulletproof glass will never see—the mysterious red phosphorescent glow the stone emits when exposed to ultraviolet light.

The Hope Diamond’s red glow has long been considered a unique property of that stone. Most blue diamonds produce a bluish-white phosphorescence if exposed to ultraviolet light. The few other diamonds known to emit red phosphorescence were commonly assumed to have been from the even larger original stone from which the Hope was cut.

“It is something that always intrigued people,” says Post, curator of the Smithsonian’s National Gem and Mineral Collection. “For people who like the whole idea of a curse and that kind of story, the fact that this thing phosphoresces a bloody red color is just too good to be true.” 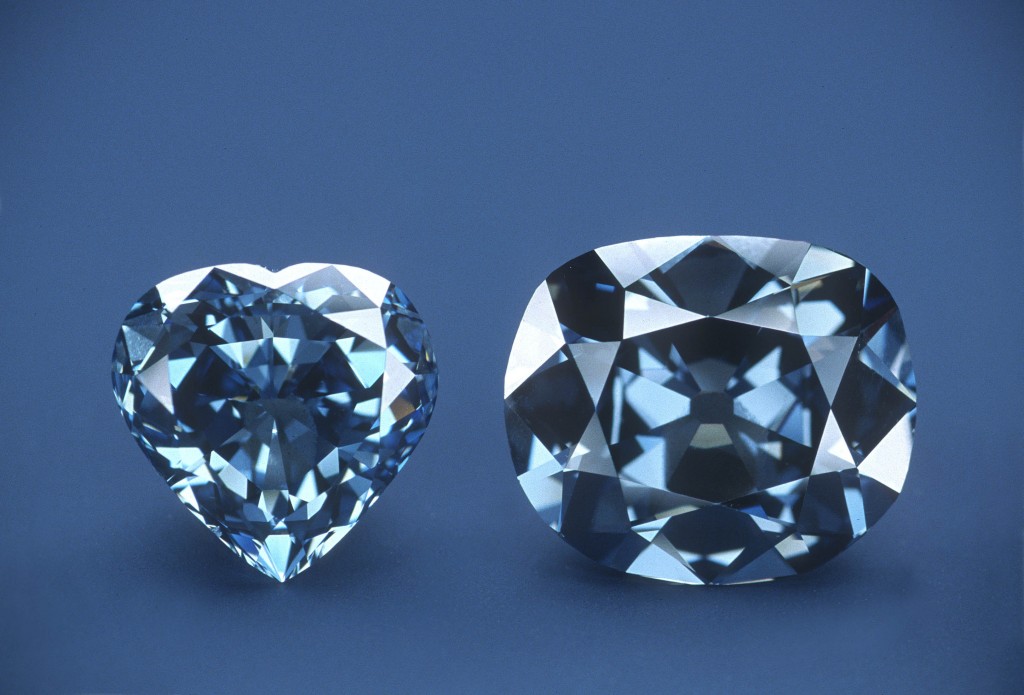 The Hope Diamond, right, without its white-diamond pendant, and the 30.62 carat Blue Hart Diamond.

Post timed his research to occur in the hours after the museum closed for the evening and before it reopened the next day. With guards standing by, the diamond was removed from its pedestal in the Harry Winston Gallery.

“We had a local jeweler come in and take it out of its setting for us,” Post says. (The jeweler returned early the following morning to reset the stone.) Next, Post and fellow diamond investigators from the U.S. Naval Research Laboratory, Ocean Optics Co. and Pennsylvania State University locked themselves in the vault with the diamond and a portable spectrometer.

“The clock was running,” Post says, and the scientists got to work. The diamond was positioned on a piece of clay inside a box that could be sealed to keep out ambient light. A fiber-optic cable connected to an ultraviolet light source was extended into the box and “pushed up against the top face of the Hope Diamond,” Post says. Then the diamond was exposed to ultraviolet light for several seconds.

When the light source was turned off, the diamond began to emit its characteristic red glow, a phenomenon that lasts several minutes. A second fiber-optic cable in the box channeled phosphorescent light from the diamond to the spectrometer. 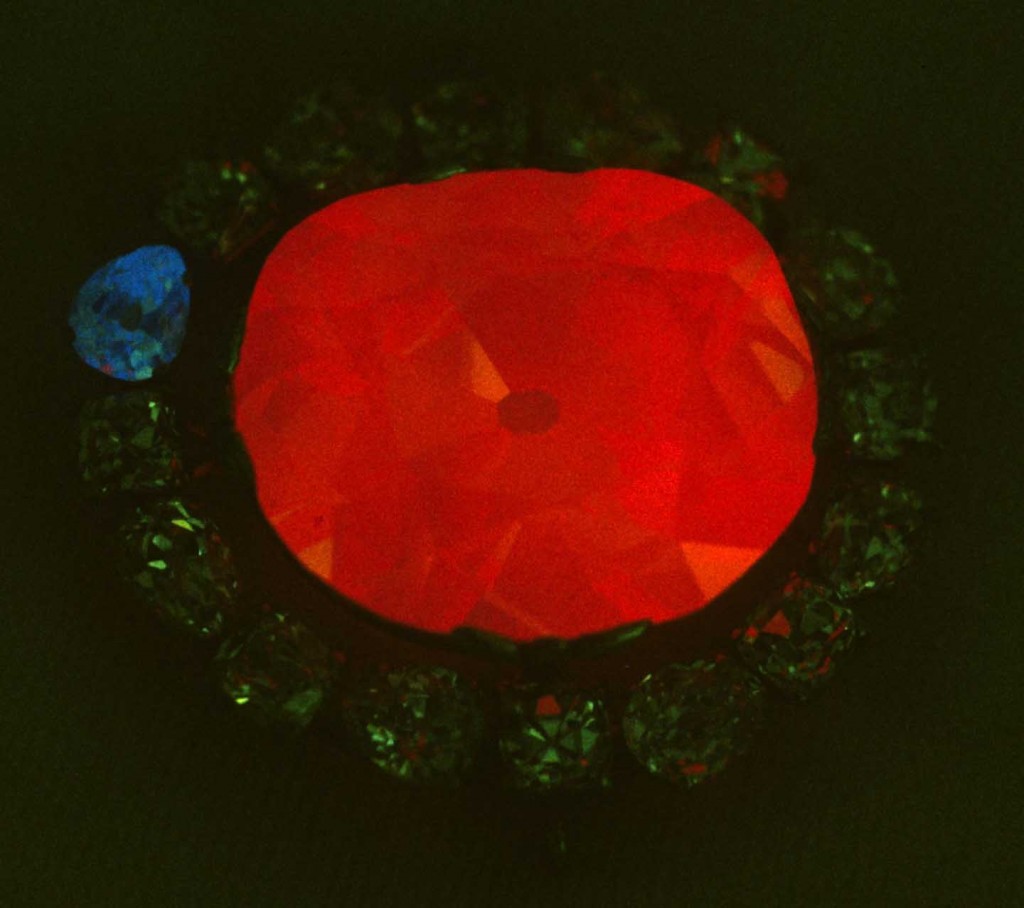 The Hope Diamond emits a red phosphorescence after being bombarded with ultraviolet light. (Photo by John Nels Hatleberg)

Spectrometers measure wavelengths of light, and the display on a laptop computer hooked to the spectrometer revealed the Hope Diamond’s red light was more than just red. “That was the first time we had been able to see a display of what the phosphorescence spectrum looked like for the Hope Diamond,” Post says.

In the vault that night, the scientists also collected spectrum readings from other diamonds, including the second largest known deep-blue diamond, the 30.62 carat Blue Heart, also in the Smithsonian’s gem collection.

Later, Post and his colleagues hauled their portable spectrometer to New York City’s Diamond District, an area of Manhattan that is a center of the world diamond industry. A dealer known to Post granted the researchers access to dozens of valuable blue diamonds in his safe for further spectrum measurements.

The scientists learned that all blue diamonds show red and green peaks in their phosphorescence spectrum. But the relative intensity of those peaks and the rate at which they decay varies from diamond to diamond, leading to differences in the phosphorescent glow seen by the naked eye.

Diamonds are composed of carbon, and impurities in the carbon give rise to an individual stone’s color. Blue diamonds have relatively high levels of boron impurities but low levels of nitrogen. Post believes that the red phosphorescence emitted to some degree by all blue diamonds is likely due to interaction between those two elements. To test that possibility, he is continuing his study of blue diamonds, using a different kind of instrument that lets him measure the amount of boron and nitrogen in individual stones “and then correlate that with the particular spectra that we’re getting off those diamonds.” 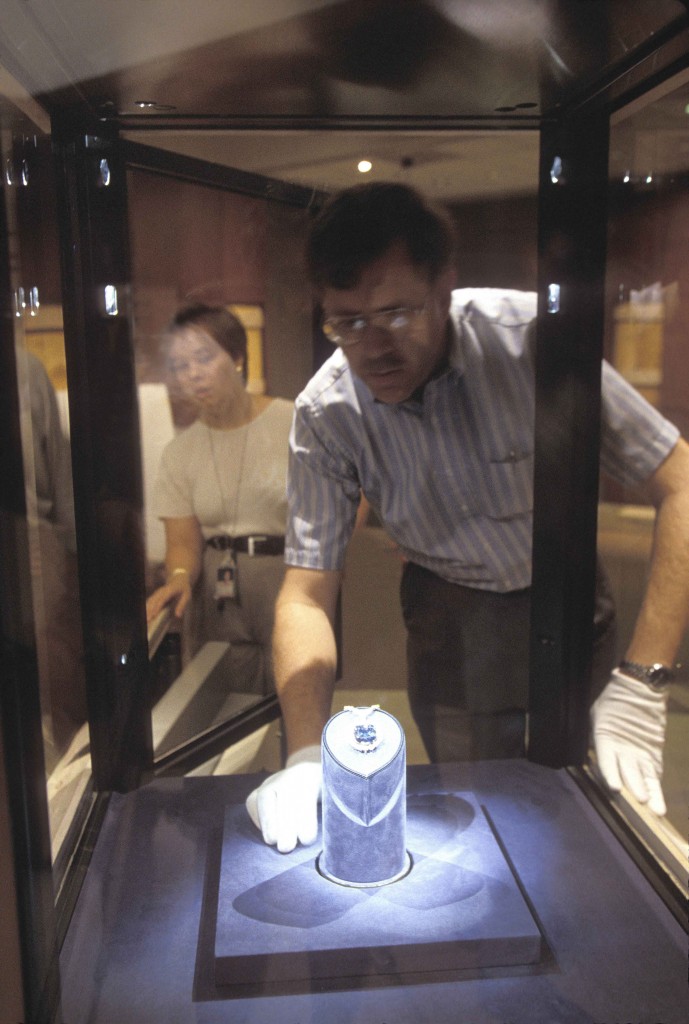 Photo: Photographed through the thick protective glass of the Hope Diamond’s exhibition case, Jeffrey Post returns the diamond to its pedestal in the Harry Winston Gallery of The Janet Annenberg Hooker Hall of Geology, Gems, and Minerals in the Smithsonian’s National Museum of Natural History. (Photos by Chip Clark)

Post’s work has already yielded knowledge of interest not just to scientists but to diamond sellers and their customers. Because the relative intensity of the blue and red components of each blue diamond’s phosphorescence is unique, the same sort of analysis that the researchers did in the museum vault might be used to fingerprint individual blue diamonds and to distinguish natural stones from man-made ones.

No stranger to spectacular gems, Post still gets a thrill from working with the Hope Diamond. “Every time I look at it I kind of go, ‘My gosh!,’” he says, noting that it is impossible to overlook the stone’s “human history, the curse and the kings, the queens, the thefts.”

However, the scientist believes that his recent research underscores the famous diamond’s importance as “a unique natural history object.”